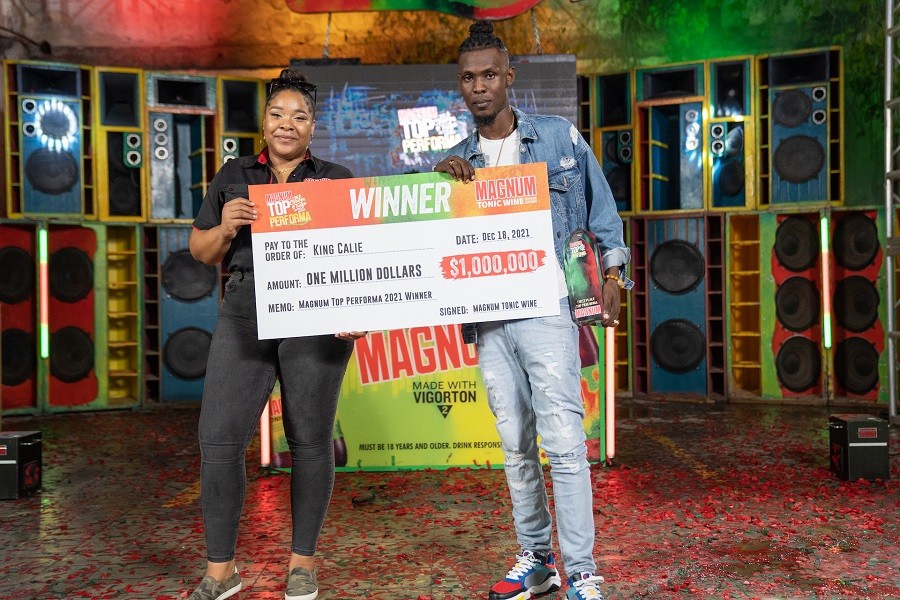 The inaugural Magnum Top Performa competition has come to a close after over three months of intense lyrical battles and creative performances.

Voting for the competition closed on Tuesday, December 14 at midnight, after which King Calie was crowned the winner during the live show on TVJ on Saturday, December 18.

Both finalists — King Calie and Prince Saj — displayed true professionalism, lyrical genius, and excellent performances to bring the first season to a close.

“We knew what we wanted to achieve with this competition, we wanted to unearth and hone talent and introduce them to the music and entertainment, but we never anticipated the impact it would have on the contestants or the support the brand would get. The debut of this competition has been nothing short of remarkable,” Powell said.

King Calie said: “The competition was great! All the contestants did really well and I am just so happy to have come out on top. I am so overwhelmed and just grateful to Magnum Tonic Wine and Romeich for this opportunity. It was a lot of work, but it paid off in the end.”

King Calie walks away with a million dollars and will have the opportunity to create a music video and a song, to be produced by Romeich Entertainment.

Second place winner, Prince Saj, will receive $300,000 and a feature on a compilation rhythm from Romeich Entertainment, while the other runners-up will receive $100,000 each.

Just as the top contestants leave with well-deserved prizes, so does Davandrey Whyte, the lucky winner of the prediction game. He will receive $50,000 for using the MagnumHub.tv platform to correctly guess who would reign supreme during the competition.

Music producer, artiste manager and a partner in Magnum Top Performa, Romeich Major had nothing but well wishes for the winner, and fellow participants.

“Congratulations to King Calie our overall winner. Also hats off to all the contestants. You all showed true professionalism, creativity, and lyrical skills, keep going, every one of you has what it takes to make it,” he said.

Magnum Top Performa is a lyrical face-off competition, in which 16 artistes clashed against each other every Thursday over a 15-week period, freestyling to ‘16 bars’ on rhythms played by a host DJ.

The show had three rounds, the preliminaries, semi-finals, and the finals, which saw the crowning of the Top Performa.

Viewers can catch rebroadcasts exclusively on the brand’s website at magnumhub.tv.